Halloween in Rome: traditions, events and ghosts you’ll love to know about 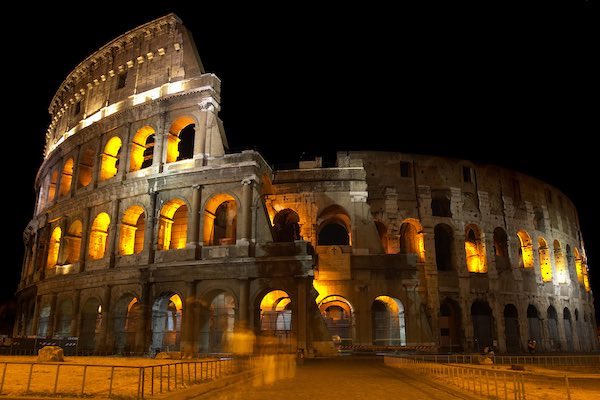 All you need to know about Halloween in Rome: events, attractions and things to do in Rome at Halloween

Halloween celebrations in Rome have become increasingly popular in the last decade or so.

While Halloween per se is not an Italian festivity, the First of November, All Saints, is National Holiday, and this, plus the appeal of pumpkin decorations, sweets and costumes have meant Halloween atmosphere is now pretty much anywhere in the capital.

Kids are the protagonists of this festivity however, many clubs embraced the theme and now offer ghost-inspired events.

If you are in Rome in October, knowing what to expect and how to participate in the festivities (or how to avoid them!) can come in handy.

This is all you need to know about Halloween in Rome.

Please note: this post contains affiliate links and, should you make a purchase through them, we might make a small commission.

Is Halloween celebrated in Rome?

Halloween is not a traditional Rome festivity.

Born in Ireland, Halloween was born to celebrate Samhain, the start of the new year in Celtic tradition, happening at the end of Harvest season, on the 31st of October.

On this night, the Celts believed the spirits of the dead were coming back to earth and mixed with the living: terrified of this event, they would build large fires to keep them at bay.

With the spread of Christianity, this event mixed with the celebrations of All Saints Day, on the 1st of November, and took the name Halloween (or also Hallowe’en, Allhallowe’en, All Hallows’ Eve, All Saints’ Eve)

From Ireland, the festivity traveled to the US where it had huge success and, from there, has slowly but surely moved to Italy too.

The celebrations in Rome are not big and mostly of the commercial type.

Families with kids love to have the opportunity to have them dress up (the other such occasion is carnival) but if you don’t have children and want to avoid the festivity, you can easily ignore the occasion.

Is there trick or treating in Rome?

Trick or treat is not traditional in Rome and usually not done door to door.

The closest thing to it is trick or treating games in amusement parks like LunEur which offers it as part of their Halloween offering (see below).

Do people dress up in Halloween in Rome?

The traditional time for dressing up in Rome is Carnival, in February, however, it is becoming more and more popular for kids and grown ups to embrace Halloween costumes too.

Children are likely to wear them on the streets, private parties and special events and it is not unusual to see shopkeepers donning some sort of ghostly attire, especially in shops and locations that cater to families (the ware wolf in our local market is pretty cool!)

The most common types of costume in Rome for Halloween are of the ghostly type however, they are distinctly less gory than those you find for instance in Ireland, where you see zombies galore!

It is not entirely unusual for kids at Halloween in Rome to go for non-scary costumes  too so if that is what your child wants to go for, that is totally ok!

Are attractions open in Rome at Halloween?

Halloween does not affect the opening hours of attractions.

In 2020, on Halloween the following attractions will be open

Important! Always abide by current regulations and check official sites for specific info and safety rules that apply at this time.

Rainbow Magicland also hosts Halloween events, this year on the theme of Alcatraz. The event is marked as ‘for all’, please find info and prices here

Cinecitta’ World devotes the full month of October to Halloween with their ‘Ottobre da paura’ ( Paura= fear but in Rome slang ‘da paura’ also means ‘really cool’) and has events for kids and grown-ups including horror house, movie screening and of course lots and lots of Halloween decorations. Official info here

The Biopaco (Rome Zoo) also usually have kids events, with dress-up: previous editions included feeding pumpkins to the lemurs and elephants and a Halloween magic show for kids. You can keep an eye on scheduled events here.

The Rome Zoological Museum usually offers afternoon Halloween events for kids 5 to 7, evening events for kids age 7 and up including treasure hunts among skeletons and skulls and in the past they also had Halloween sleepover! No official events have been announced for this year, you can keep an eye on their official website here

Most usual venues with Halloween events for grown ups

It is beyond the scope of this website to list current events but usually, you can expect Halloween night celebrations in Irish and ex-pat pubs such as Finnegan’s (Via Leonina), Fiddler’s Elbow (Via dell’Olmata), both in the Monti District), Scholars Lounge (Via del Plebiscito) and  Abbey Theatre (Via del Governo Vecchio) and event venues such as Lanificio and Alcatraz Live

Rome has several spooky attractions that can help set the mood for a scary Halloween in Rome even without going to organized events.

These are some interesting Rome landmarks with a dark side.

One of the best known spooky places in Rome is the Capuchin Crypt in Sant Maria della Concezione Church on Via Veneto, which is entirely decorated with skulls and bones of over 4000 capuchins friars buried here.

At the crypt entrance the memento ‘Quello che voi siete noi eravamo; quello che noi siamo voi sarete’ (what you are, we were; what we are, you will be) sets the tone for this spooky place.

Rome’s catacombs with their long, dark, meandering underground tunnels are more than a little bit scary, especially if you don’t like small spaces and for children.

The scary element is the location and the knowledge that if you leave your group, you will get lost (seriously, it is paramount not to leave your guide, as they make very clear at the start of the visit.

You can book your visit here

Santo Stefano Rotondo is a round church in Rome with very peculiar and very violent frescoes that are not for the faint of heart!

If you are visiting with kids, they may not love them (they are disturbing rather than spooky) but for grown-ups, this is a peculiar church worth seeing.

Museo delle anime del Purgatorio is a small, peculiar display of objects said to prove the existence of the purgatory in the church of Santa Maria del Suffragio, along the Tiber.

The collection has items from all over the world with signs said to have been left from souls in purgatory to their living beloved so that they could speed up their entry onto paradise with ad hoc masses and intercessions.

It will come as no surprise that a city with a history as long and bloody as Rome has a fair share of ghosts!

Some you may want to know about are:

Mastro Titta, Rome’s executioner, whose ghost is said to still haunt all the places where his ax carried out jobs such as Castel Sant’Angelo, Piazza del Popolo, the Mouth of Truth etc

Beatrice Cenci, maybe Rome’s most famous ghost. She is said to haunt Ponte Sant’Angelo, where she is said to have been spotted carrying her own severed head. While this would be a very Halloween-y sight, she is said to be there on the night between 11 and 12 September so if you don’t see her on the 31st of October, that may be the reason…

The ghost of Messalina is also said to be haunting the area of the Oppian Hill, close to the Colosseum and the Domus Aurea. In this same area, you may also look out for the ghost of Tullia Minore, the second wife of ancient King of Rome Tarquinius the Superb, who took her father’s life in this very place.

The ghost Olimpia Maidalchini, aka La Pimpaccia, is said to still roam the streets of Rome on a flaming chariot, darting across Ponte Sisto towards the Pamphili’s residence.

On Via dell’Anima, near Piazza Navona, is said to roam the ghost of Costanza de Cupis, or rather her hands, which the stories tell us  she had lost in life because of a curse.

Ghost and dark Rome tours on offer include:

So as you can see, there is quite a variety of ways to celebrate Halloween in Rome! Stay safe everyone!

Interesting and fun facts about the Colosseum for kids

Why you will love Rome’s chocolate factory, a hidden corner of chocolaty heaven in the heart of Rome

Rome in October: all you need to know...

The best Rome airport to fly into: a...

Visiting Rome in winter: all you need to...

How to call and use taxis in Rome:...

What to wear in Rome in May: complete...

What to wear in Rome in March: complete...

What to wear in Rome in April: complete...

Rome at Easter: all you need to know...

Can I travel to Rome right now? Official...