Santa Prassede, Rome: all you need to know for visiting 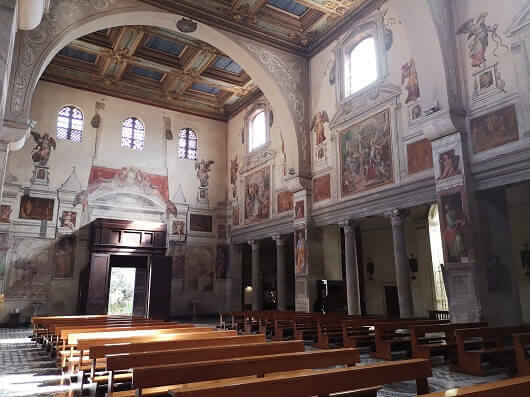 All you need to know to visit Santa Prassede, a stunning basilica in Rome with some of the most ancient and beautiful mosaics in the city.

I don’t like playing favorites when it comes to Rome churches. However, I would be lying if I didn’t admit to having a soft spot for beautiful Santa Prassede (or St Praxedes, as it is otherwise spelled).

Located in Rione Monti, a charming area of Rome city center with small dusty streets and charming corners, Santa Prassede is slightly off the beaten track but has something that makes it truly special: ancient paleo Christian mosaics that are among the most beautiful and precious mosaics in the city!

I love visiting Santa Prassede any time I am in Monti: the basilica is easy to visit and truly impressive.

These are my tips for visiting. I hope they will inspire you to add this stop to your Rome itinerary!

What is special about the Basilica di Santa Prassede?

Santa Prassede is an ancient basilica and the most important example of Byzantine art in Rome.

The church as we see it now was built in 817 AD, commissioned by Pope Pasquale I, but historians have reasons to believe a church already existed here in the V century AD and was possibly built on an even older shrine, dating back to 150AD!

What makes this church special are the ancient mosaics that decorate its apse and side chapels.

These are wonderful examples of a style of mosaic art from the ‘Carolingian Reinassance‘ which evokes elements of paleo Christian art and are among the most beautiful in Rome.

What to see in Santa Prassede

Santa Prassede is a beautiful church and you can easily enjoy it just taking a stroll along its ancient naves. However, there are a few special things in Santa Prassede you should seek out.

The first thing you notice when entering Santa Prassede are the three large naves that make up the central body of the church.

They are divided by large columns and they are flooded with light entering the otherwise shaded church from the windows at the top of the walls.

The resulting lighting effect is beautiful and makes the church bathe in what evokes beams of heavenly light.

The naves are surrounded by what remains of beautiful frescoes (you can still spot the reds and greens of their pigments) and host the benches facing the altar.

The altar and apse

The altar itself is a sight to behold. Built by the order of Cardinal Luigi Pico della Mirandola in 1730, it is very different from the rest of the church as it is framed by imposing red columns and crowned by an elaborate roof.

These are typical of its era of construction and create a distinct contrast with the surrounding much more ancient decor.

Behind the altar, you get a first glimpse of the mosaics that make Santa Prassede so famous.

The apse is entirely covered with mosaic tiles and, if you look at the symbols carefully, you may see that they are a depiction of scenes for the book of the Apocalypse.

Elements you may want to try spot are the Heavenly Jerusalem, the Lamb on the throne and the 7 candelabra.

The mosaics behind the main altar are beautiful but the real jewel in the crown is the Chapel of Sant Zeno, the lateral chapel you find to the right of the church.

This is a small chapel with a cross-vaulted ceiling and entirely decorated with elaborate Byzantine mosaics that cover every inch of this peculiar space.

A little bit of natural light comes in from the small chapel window but the best way to see the mosaics is to activate the chapel lights putting a coin into the machine just outside.

As they come up, the golden decorations of the mosaics will shine in front of your eyes and reveal the ancient age of these masterpieces.

Even without any art knowledge, the shapes of the mosaic tile, the colors and the peculiar face rendition of the characters represented draw you back to a time that is lightyears away from both the grandeur of imperial Rome and elaborate splendor of Baroque times and make this chapel one of a kind in Rome.

The most impressive of the mosaics in the chapel of St Zeno is the one right on the ceiling, representing the Christ Pantocrator but I personally love the one depicting a series of female figures, also in the chapel.

These are portraits of Santa Prassede, Santa Pudenziana (her sister, with a church of her own in nearby Via Urbana), Agnes and Theodora, the mom of Pope Pasquale, to whom this chapel was originally dedicated.

What I love about this mosaic is the special iconography of the women, who look somewhat a mix between an ancient Roman matron and a Byzantine princess!

The column of the Scourging of Jesus (reliquary)

Inside the chapel of San Zeno, in a small alcove to the right of the entrance, lies the reliquary of the column of the scourging of Jesus, now protected by a glass case.

How long for visiting Santa Prassede

Santa Prassede can easily be visited in less than 30 minutes.

A small info point with leaflets in several languages is inside the church (to the right of the main entrance) and it is a good place to start since it has interesting materials that teach about the church.

Here is also where you have the chance to leave a donation, should you be so inclined.

Where is Santa Prassede: address and how to find it

This is a small street and you would be excused if you missed the entrance to the church because there is nothing from the outside that suggests this basilica is half as beautiful or half as large as it is in the inside.

The main entrance and facade are now almost entirely hidden and this adds to the charm: entering Santa Prassede from its underwhelming door makes you feel like you entered the Tardis!

The reason for this is that the main entrance to the church is not here but rather on Via di San Martino ai Monti, around the corner.

However, this main entrance is usually closed and the facade is now invisible from the street.

To see it, enter the church from Via di Santa Prassede and, if the door is open, exit into the small garden and look up: the original facade will be behind you.

How to get to Santa Prassede

You can reach Santa Prassede on foot or by bus/ metro.

On foot: the basilica is a 5-minute walk from Termini station and less than 3 minutes walks from the famous Basilica di Santa Maria Maggiore.

What else there is to see near Santa Prassede?

Rione Monti is a lovely area of Rome and you can easily use a visit to the basilica as an excuse to explore this area.

This is a beautiful area of Rome with cobbled streets, dusty corners and vintage shops (this is a great place for shopping) and the best way to explore it is to allow yourself to get lost and follow the maze of streets making up this part of town.

Not to be missed here are Santa Maria Maggiore, Via Urbana, Via Panisperna, Via dei Serpenti and charming Piazza della Madonna ai Monti, streets that form the heart of Monti and connect the Roman forum, on one end of the district, Termini station, on the other.

What is the address of Santa Prassede?

What are the opening hours of Santa Prassede?

Is there a dress code for visiting Santa Prassede?

Access to all Rome basilicas is only allowed to visitors dressed in a ‘respectful’ manner, this usually meaning clothing that is not excessively revealing (no shorts, no strappy tops, bare chest/back etc). At the time of writing, Santa Prassede does not offer shawls to cover up should you not be appropriately dressed so I do recommend to plan your visit in advance should you be in Rome in summer, when the hot weather might make more conservative clothing tricky.

Do I need tickets for visiting Santa Prassede?

Santa Prassede is a consecrated church and there are no tickets nor entrance fees to it. It is, however, advisable to bring Euro coins when visiting Santa Prassede to operate the lights in the chapel of Saint Zeno (1 euro and 2 euro coins)

I hope you enjoyed this overview of Santa Prassede and inspired you to add it to your Rome itinerary. Safe travels to Rome!

Visiting Castel Sant’Angelo, Rome: all you need to know about Hadrian’s Mausoleum

How to be a sustainable tourist in Rome

How far are Rome main attraction from one...

Obelisks in Rome: all you need to know...

The Colosseum at night: all you need to...

Viaggio nei Fori, Rome: all you need to...

Passetto del Biscione: how to see this stunning...

The Roman Houses of the Caelian Hill: why...

Rome Botanical Gardens: why and how to visit...