Amatriciana recipe: how to make pasta all’amatriciana at home 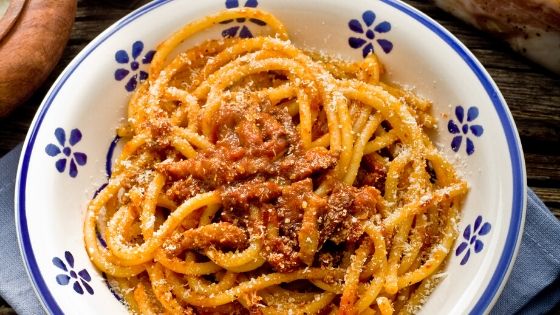 Pasta all”amatriciana is one of the most traditional and loved pasta dishes in Rome.

Named after the small town of Amatrice, just outside of the capital, this pasta dish shares its key ingredients with other classic dishes of the Rome area such as carbonara, cacio e pepe and gricia however, it lifts them with the help of tomato-based sauce and a little bit of heat from a chilly.

This is the original amatriciana recipe and step by step intruction to make this classic Rome food at home.

How to make pasta all’amatriciana at home: perfect Amatriciana recipe

Can’t make it now? Pin it for later!

How to make Amatriciana: method

Most common mistakes when making Amatriciana

TAs you can see from the process above, amatriciana is easy to make so the mistakes usually made have to do with the ingredients chosen, rather than the cooking process.

The most common amatriciana mistakes are:

Using onion – there is no onion in this dish! Like there is no cream in carbonara, this is maybe the biggest food ‘sin’ when making Amatriciana. now that you know, it is also an easy one to avoid!

Using garlic – there is no garlic in amatriciana either.

While it is tempting to think that garlic is hardly out of place in an Italian dish, this would be misleading for amatriciana. Rome pasta dished do not make use of garlic and do not need it: try this recipe without changing anything and I am sure you will agree there is nothing lacking in terms of taste!

Using pancetta – Amatriciana uses guanciale, which is pork cut from the cheek of the pig and that has a delicate, distinctive taste.

Since it is often hard to find abroad, it is common to use pancetta instead.

While this may be inevitable should guanciale not be available, this will change the taste of Amatriciana and will give a different result from what you may have tasted in Rome

Cooking the pasta too long – this is true for all pasta dished but a rule worth repeating: you need your pasta al dente. As well as keeping a better taste and a more pleasant texture, pasta al dente is easier to digest than the goo you get if you overcook it.

Adding spices – the recipe for amatriciana calls for very few ingredients and you may feel tempted to add something extra to make it ‘better’.

However, the simplicity of the dish is its strength: do not be tempted to add spices or herbs like oregano or others: they do not belong in this dish and the dish definitely does not need them.

What you need to know about amatriciana: fun fact

Ask anyone what males Amatriciana unique and different from other pasta dishes in Rome and everyone will shout: the tomato sauce!

Indeed, amatriciana differs from carbonara, gricia and cacio e pepe because of the presence of the tomatoes however, tomatoes didn’t belong in the original recipe!

Food experts tell us that the addition of tomatoes only happened in 1790, when chef F. Leonardi first mentions it in the book “Modern Apicio’

Where to taste amatriciana in Rome

If you are lucky enough to find yourself in Rome, make sure you taste Amatriciana in one of the best traditional Rome restaurants.

Some to try are:

Please note that nutritional information are an estimate only

The Aventine Hill: why and how to visit this wonderful corner of Rome

Grattachecca: how to enjoy Rome’s most delicious frozen...

Delicious Romanesco pasta recipe: how to make it...